A Picture Paints a 1000 Words: The Power of Metaphor

Metaphor can be powerful in coaching. It is part of ICF Core Competency 7, Evoking Awareness, a competency that I often sense is least used and yet can bring powerful insight and new thinking more quickly. Let’s explore what it is, why it is so useful in coaching and how coaches, and indeed anyone, might use metaphor to deepen awareness and facilitate insight.

What is a metaphor?

The word metaphor means “to carry over”. A metaphor is a figure of speech in which a word or phrase that ordinarily means one thing can also relate to something else and therefore carries over or conveys meaning. Metaphors can offer insight into what is going on inside the client and convey the meaning rather than explaining the meaning. In the English Language, and in speaking to coaches and people of different languages, I believe the same is true, our languages are peppered with metaphor (to use a metaphor!).

The phrase ‘A picture paints a 1000 words’, beautifully represents what a metaphor can do. It can cut through the words to evoke and convey the meaning so quickly. The meaning that often enables the other person to connect, not just with the head, but with the heart and sometimes the gut. In essence, a good metaphor, will easily evoke an idea, a message, an emotion or a meaning without the need for many words or explanation. It also engages the person on many levels and senses.

Why is metaphor important in a coaching conversation?

Remembering my reference to assumptions in a previous blog: Are you are ASS or an Owl?, as a coach, we may need to enquire into the metaphor for two reasons:

However, if we come from a position of ‘not knowing’ (ICF Core Competency 2: Embodies a Coaching Mindset), and we honour our belief that clients know all they need to know, I would offer that in fact we don’t necessarily even need to have the meaning of the metaphor explained. We simply need to use the metaphor with the client for them to make their own meaning.

How to work with metaphor

Here are some simple examples that might turn on a light for you dear reader:

When someone talks about transitioning to retirement. Instead of talking about the transition, they might use the phrase ‘the sun is setting on my work’. It’s a colourful phrasing that evokes a possible message that it’s about the slowing down of work rather than a full stop and watching the sun set can be joyful. Whereas the word retirement often evokes sadder and more difficult emotions. When working with a client on this, a coach might enquire as the sessions proceed: ‘where is the sun now?’ or ‘how quickly do you want the sun to set for you?’ which will more likely speak to the heart of the matter more quickly.

A client states that they are ‘drowning in overwhelm’. A coach could ask them to explain what the overwhelm is, however that might make them feel even more overwhelmed. The coach could simply ask, ‘what might a lifeguard need to offer you /bring to you, at this point?’.

If you know something about the client, you might also use that knowledge in the way of a metaphor which the client may or may not pick up. If a client loves baking for example, and in their coaching topic they are seeking to improve something, you might ask them ‘what would make it better?’. However, you could simply ask ‘What would be the icing on the cake for you?’.

When we enquire too deeply into the metaphor, it may keep the client in their head, whereas it may be more useful to support them to be in their heart or gut and evoke an emotion as a response which will lead to a forward movement or evoke new thought and awareness.

So, the next time you are with a client, or even reviewing a recording of your work, ask yourself ‘did I step over a metaphor?’ or did I catch and use the metaphor to allow the client to have a staircase up toward their desired outcome? 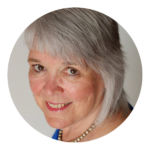 Hilary Oliver is a Master Certified Coach (MCC) with the International Coaching Federation (ICF). She is also a trained Coaching Supervisor and Mentor Coach. Hilary trains coaches and works with managers and leaders to develop their coaching capability. She works as an International Corporate Executive and Board Level Coach, a leadership development designer and facilitator working with a wide range of organisations. Hilary also specialises in working with organisations to support them develop coaching culture. She has been the President of the UK ICF Chapter and is a Past Chair of the ICF Global Board.